Child Marriages: A Curse for Humanity

Add A Pinch Of Turmeric To Your Winter Diet!

NewsGram Desk
There is no use preparing for an influx of food delivery orders if you don’t let people know that you are offering food delivery. Pixabay

For example, the central and southern states boast the highest concentrations of fast food restaurants per capita, with Alabama as the state with the most. The northeastern states have the fewest and are led by Vermont, New Jersey and New York. 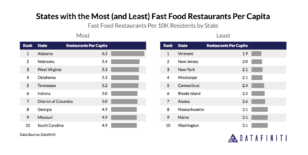 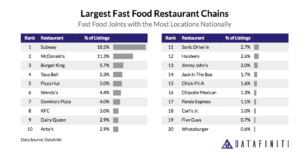 McDonald’s, which is the second largest chain of fast food restaurants, can be found in every American city, and Orlando and Las Vegas have the most per capita with 20.9 and 13.9 McDonald’s per 100,000 residents.

What is the largest fast-food chain? Subway, which has 18.5 percent of all fast food restaurants. McDonald’s has 11.3 percent. Behind them, in third, is Burger King, which has 5.7 percent.

“Southern and Central states are the place to go if you love fast food; head to the East or out West if you don’t,” Datafiniti wrote. “Southern cities have abundant options for fast food, particularly in Florida; head to California if you don’t want to eat on the go.

“As for McDonald’s, it appears that this major restaurant chain has spread to every corner of America. Head to California if you don’t like the golden arches, and head basically anywhere else if you do.” VOA

Stay Strong As You Age

According to him Amitabh Bachchan is a great actor in the industry.

Abhishek said after looking at the performance of Rajshree, who is often compared with Lata Mangeshkar on the show, that she reminds him of being compared with his father. "Rajshree, whenever I have got the chance to watch the show, I've seen people compare you to Lata didi. It actually reminded me about how people compare me with my father and ask me how I feel about it."

According to him Amitabh Bachchan is a great actor in the industry and this is what he says to everyone making these comparisons. "My answer to them is that there's no greater actor in this film industry than Amitabh Bachchan and if I'm being compared to him, I am sure I must have done something good."

"Similarly, your voice has a different kind of magic like Lata ji and that's why people are comparing your voice with her. I feel you should always take this as a compliment," he concluded. 'Sa Re Ga Ma Pa' airs on Saturday and Sunday on Zee TV. (IANS/ MBI)

Winters in India have always beckoned for that hot, steaming bowl of tomato and pepper rasam or the mellow, millet based Raab.

Winters in India have always beckoned for that hot, steaming bowl of tomato and pepper rasam or the mellow, millet based Raab. Certain dishes like sarson ka saag, undhiyu, nimona pulao are winter specialites in the country. Seasonal food has always been an Indian speciality -- we switch our choice in fruits, vegetables, sometimes even grains with the onset of different season. The preference of using specific ingredients during certain climates is visible in our sweets as well. It's common to find local and traditional delicacies made of jaggery, instead of sugar during the winters. Case in point -- the Nolen Gur Rasgulla, a speciality made in Odisha and West Bengal between November to February.

Just three minutes of exposure to deep red light once a week, when delivered in the morning, can significantly improve declining eyesight, finds a new study.

Just three minutes of exposure to deep red light once a week, when delivered in the morning, can significantly improve declining eyesight, finds a new study. The study, published in the journal Scientific Reports, found there was, on average, a 17 per cent improvement in participants' colour contrast vision when exposed to three minutes of 670 nanometre (long wavelength) deep red light in the morning and the effects of this single exposure lasted for at least a week.

However, when the same test was conducted in the afternoon, no improvement was seen. "We demonstrate that one single exposure to long wave deep red light in the morning can significantly improve declining vision, which is a major health and wellbeing issue, affecting millions of people globally," said lead author, Glen Jeffery from the University College London.

Using a provided LED device, all participants were exposed to three minutes of 670nm deep red light in the morning between 8 a.m. and 9 a.m | Photo by Hush Naidoo Jade Photography on Unsplash