GET APP
Home World Creator of ‘Tibeb Girls’ use their Superpowers to Stop Harmful Practices against...
Facebook
Twitter
WhatsApp

ADDIS ABABA, May 6, 2017: Three young Ethiopian girls use their superpowers to stop harmful practices against girls in rural areas and to promote access to school. That is the story behind “Tibeb Girls,” a new animated series developed in Ethiopia.

“Tibeb Girls” is the first animated cartoon in which Ethiopian girls play not only the lead characters, but are also portrayed as superheroes. “Tibeb” means wisdom in Amharic.

“For me, it was very important to have girls who look like me and who look like my child to be on the screen playing very good role models,” said Bruktawit Tigabu, who created “Tibeb Girls.”

The animated cartoon breaks taboos by discussing things such as menstruation and, in the first episode, the lead characters save a girl from child marriage.

Bruktawit screens the show at schools and events around Ethiopia.

“Most of the issues we are raising are not well discussed in the community or in school or in the house,” she said. “So that is another inspiration to really break the taboo and give them a very entertaining, but also engaging way to talk about very serious subjects.”

The animated series is produced in Addis Ababa with a team of voice actors, artists and writers.

Representing and empowering girls is a big responsibility. Therefore the writers, such as Mahlet Haileyesus, put a lot of preparation into an episode.

“We try to include everybody, like the relevant stakeholders, government bureaus, specific target groups,” said Mahlet Haileyesus, one of the show’s writers. “And then once the synopsis is developed, we do prototyping, which means we go to the field and test it.” 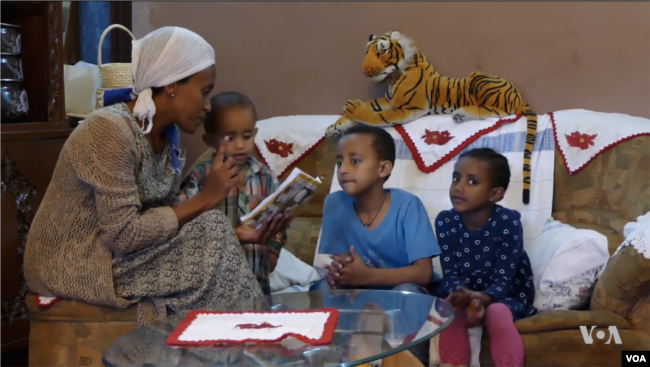 “Tibeb Girls” is also published as a comic strip that Meaza Takele reads to her young children each night before they go to bed.

“When I ask my children why they love the cartoon, they say it’s because now they have a cartoon that is Ethiopian and where their own language is spoken,” she said.

Creator Bruktawit hopes to raise funds to further develop the TV show, as she tries to sell the first season to broadcasters in Ethiopia and other African countries where young girls face the same issues. (VOA)