WHITE HOUSE,17 March,2017: Steve Herman became VOA’s White House bureau chief in March after spending 25 years as a foreign correspondent. His previous post required Herman to travel often throughout the world. Now he reports from a small booth on the world’s biggest political stories. Here are his initial impressions of day-to-day work as a White House correspondent.

The “mushroom method” refers to keeping reporters in the dark and feeding them manure. Throughout many presidential administrations, reporters assigned to the basement by the West Wing have frequently complained of being treated like mushrooms.

Others have compared their plight to prisoners in cramped, overcrowded quarters. 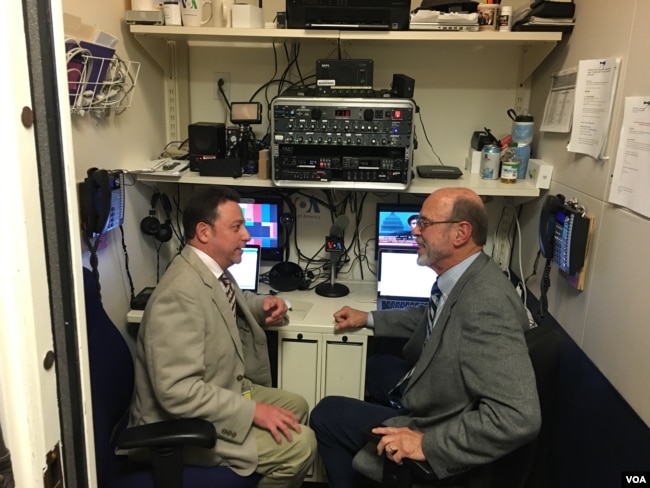 “Most people think the White House beat is glamorous. It isn’t,” recalls former VOA White House correspondent Paula Wolfson. “It can be a boring grind in a little booth that can feel stifling at times.”

Wolfson adds that despite the mostly obstructed view the reporters “are an eyewitness to history and the job is what you make of it.”

Once cleared through the northwest gate, the roaming ground for White House correspondents is quite limited with infrequent exceptions.

The reporters can meander unescorted through the two narrow floors encompassing the press briefing room. Down one floor, the basement booths and desks are where VOA and a dozen or so other news outlets maintain their White House bureaus.

The only outdoor space not off limits is between the so-called “Palm Room” doors and the winding driveway from the West Wing entrance to an area of the North Lawn where TV reporters’ stand-up positions are known as “Pebble Beach” (once covered with gravel, but now asphalt).

Presidential departures and arrivals via Marine One are generally open to all media with White House passes and credentials. That allows escorted trips to the South Lawn, which doubles as a landing pad for the presidential helicopter.

The events are an opportunity for reporters to shout questions at the arriving or departing president who can feign hearing difficulties due to the noisy aircraft engines. 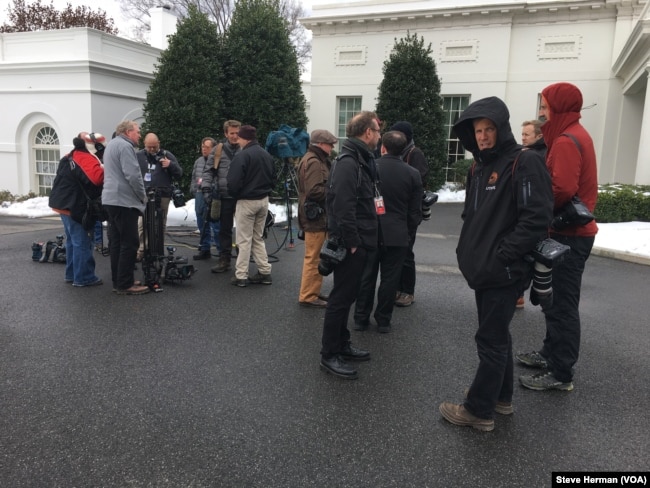 Members of a White House press pool waiting outside the West Wing on a chilly day.

There may also be glimpses of the president entering or exiting the Oval Office.

No more than a small designated pack of media ever assemble in the president’s famed Oval Office at any one time. This group is known as a “pool,” which shares its video, audio or notes with other non-attendees who toil for outlets on the rotating list of pool duty.

VOA finds itself on in-town pool duty, on average, twice a month. That means standing by for long hours of waiting for something (or nothing) to happen and then hearing a squawk over the loudspeakers to quickly assemble at the Palm Room doors.

“Nobody is keen on pool duty,” said Wolfson who covered the White House from 1988-92 and again from 2001-2009. “You have to make sure your equipment is ready to record at all times. … And never forget to take a good book.”

These days the book is usually replaced with distracted scrolling through one’s Twitter feed.

Although pool duty is mostly mundane, it is, according to Wolfson, “a necessary evil – ask anyone who was covering the White House when Reagan was shot (in 1981 outside a Washington hotel).”

The most familiar scene involving reporters and the White House is the briefing by the press secretary.

In previous administrations, there was a tradition of calling first on a front-row senior wire service reporter (AP nowadays, UPI in decades past).

The White House Correspondents’ Associates controls the press room seating arrangements, but the White House, itself, determines which individuals receive credentials to enter and line the aisles. 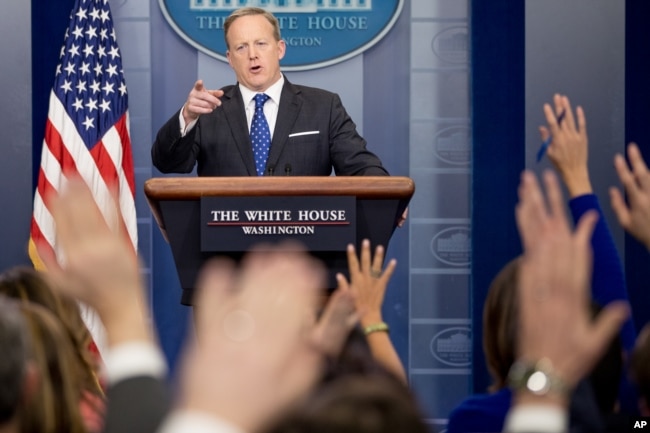 FILE – White House press secretary Sean Spicer takes a question from a member of the media during the daily press briefing at the White House in Washington, Feb. 21, 2017.

VOA has had a full-time presence in the White House press for many decades and occupies a fourth-row permanent seat between National Journal and Fox News Radio in the briefing room.

Press Secretary Sean Spicer, much to the chagrin of the major media outlets, gives less priority to the wires and TV network journalists, instead pointing his finger over them to other reporters, including those on the sidelines. This includes those from entities so obscure that a Google search for their bylines yields no results.

Some reporters who ask questions at the daily briefings are not even in the room – they are the rotating recipients of the new “Skype seats” – their video images beamed in behind the press secretary, who has selected them in advance from across the country.

The interchange between the briefer and the questioners, in every administration, has been testy at times.

In the Trump White House, however, it has frequently turned into a test of wills. Spicer daily finds himself on the defensive, called on to explain the president’s controversial tweets. He has no reluctance to turn the tables on the media, slamming journalists and accusing them of “deliberately false reporting.”

Behind the scenes in the press room, it has been less jocular.

Tempers have frayed over the White House’s decision to credential commentators from far-right online websites, including those accused of supporting white nationalism and trafficking in conspiracies. 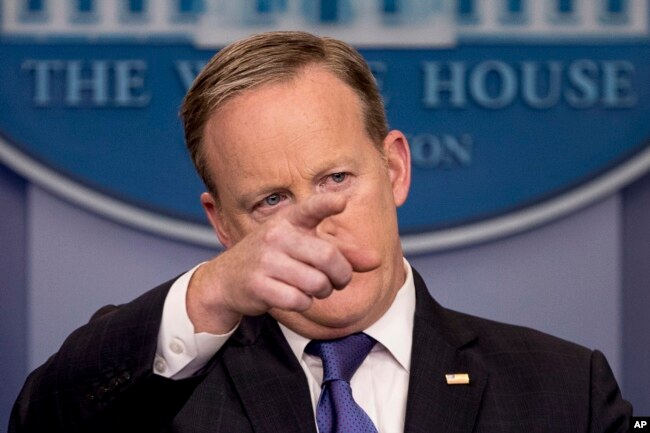 White House Press Secretary Sean Spicer calls on a member of the media during the daily press briefing at the White House in Washington, March 13, 2017.

One such figure has commented publicly that he was in the press room primarily to dig up dirt on the established White House correspondents.

The grizzled standard-bearers of the mainstream media in the front row roll their eyes and mutter curses when Spicer points to the back of the room and calls on one of the so-called floaters – usually young Trump cheerleaders who will throw questions at Spicer with all the hardness of a beach ball.

For the president’s supporters, the media’s criticism falls on deaf ears. Many of them are already critical of the mainstream media, so journalists’ complaints are taken as evidence the administration is following through on Trump’s attacks on the so-called “dishonest” media.

This all puts the White House press room reporters in the spotlight, despite their best efforts to keep it beamed on the president and his players.

Struggling to avoid being cultivated with the mushroom method, the subterranean journalists advocate to a sometimes-skeptical outside world the words of former U.S. Supreme Court Justice Louis Brandeis: “Sunlight is said to be the best of disinfectants.” (VOA)

After Customer Abuse, A US Restaurant Closes For A ‘Day Of Kindness’

Have Rajendra And KCR Ended Their Cold War?