Kalaripayattu: The South Indian Martial Art That Birthed All Others

NewsGram Desk
FILE - Ana Garcia, center, fills out a form for her 13-year-old son, Jose Hernandez, before getting a Tdap shot outside Tustin High School in Tustin, Calif. Source-VOA

Washington, May 20, 2017: The World Health Organization has delivered dramatic news about the causes of death for young people the world over. Governments and health agencies have made great strides in reducing deaths of young children through immunization and programs that address maternal and infant care. But adolescents have somehow fallen through the cracks.

The study shows traffic injuries are the top cause of death among adolescents, those between 10 and 19. In most cases, the adolescent is struck by a car while walking or riding a bicycle.

Other leading causes of death include lower respiratory infections and suicide, the report found. The causes differ by gender, age and region. Boys between 15 and 19 years old are more likely to die from traffic injuries than girls or than younger boys. In sub-Saharan Africa, children are more likely to contract HIV.

Girls between 10 and 14 are at risk for getting respiratory infections from indoor air pollution and from breathing in fumes from cooking fuels. Older girls, between 15 and 19, had a greater risk of death from pregnancy complications, childbirth or unsafe abortions. Teenage girls generally have small pelvises which lead to difficult labor.

The point of the study that was conducted by the WHO and partners at other U.N. agencies and the World Bank. 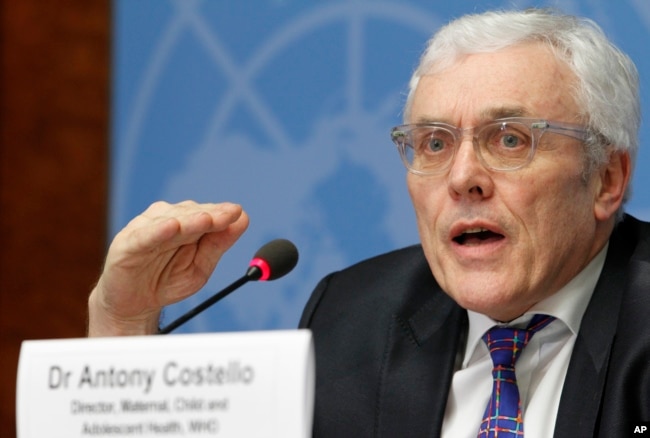 While the study focuses on the causes of death, Costello said the point was to help develop a framework and a plan to improve the health of adolescents. If adolescents had access to good health services, education and social support, fewer young people would die. In the case of traffic related deaths, he said better traffic laws, speed limits, the use of seatbelts could save lives in countries that don’t have strict driving safety laws. Costello pointed out that “In India, for example, there are 90,000 deaths on the road each year; many of those are adolescents and children.”

Dr. Flavia Bustreo, the assistant director-general at WHO, said, “Adolescents have been entirely absent from national health plans for decades.” The report proposes changing these plans and trying to help adolescents develop healthy lifestyle habits.

Costello said, “The roots of diabetes, of heart attacks, of strokes, of lung cancer, the root of that lies in the adolescent years, how the adolescents approach nutrition, and diet and exercise, whether they start to smoke or not, or abuse other substances.

“Governments have got to invest in young people,” Costello said, because “they’re the future. We mustn’t be afraid to involve children in designing their own environments, in coming up with creative ideas, in working with peer groups, and investing in things that will give them an exciting life without exposing them to long term risks that could be avoidable.”

A study published in The Lancet in April shows that improving the physical, mental and sexual health of adolescents could result in significant economic returns. The study contends that an investment of about $4.60 per person per year would yield more than 10 times as much in benefits to society. This study was conducted by researchers from Victoria University and the University of Melbourne along with the United Nations Populations Fund.

The Crunch In Your Burger...

Deciphering The Hidden Motive Behind The Dismantling Hinduism Conference

An Essential Guide To Myths, Legends, Science Around India's Geography

Swastika- The Most Misunderstood Sacred Symbol

Swastika, one of the sacred symbols used by many religions like Hinduism, Jainism, and Buddhism.

The symbol of Swastika is known to signify peace, prosperity, and good fortune in the religious cultures of Eurasia. In fact, this symbol is considered very significant in Hinduism, Buddhism, and Jainism. But, at the same time, it has become one of the most misunderstood religious symbols and has been globally banned in many countries.

The reason why the symbol of Swastika is banned in many countries is because of its association with Adolf Hitler's extreme political ideology, Nazism, as Swastika as its official symbol.

Since emerging into the public eye with a historic gold medal at the junior world championships in 2016, he has maintained a high level of performance

India celebrated a historic day on August 7, as 23-year-old Neeraj Chopra became the first Indian to win an Olympic gold medal in athletics. In the men's javelin throw event, he achieved his greatest triumph, throwing the javelin 87.58 meters on his second try.

Neeraj Chopra was born on December 24, 1997, in Khandra village in Haryana's Panipat district. He grew up in a Haryanavi family of farmers. He is the brother of two sisters. He graduated from Dayanand Anglo-Vedic College in Chandigarh and is now enrolled in Lovely Professional University in Jalandhar, Punjab, pursuing a Bachelor of Arts degree. Chopra was bullied due to his obesity as a kid, which prompted his father to enroll him in a nearby gym. He then joined a gym in Panipat, where Jaiveer Choudhary, a javelin thrower, noticed his potential and coached him. When the 13-year-old Chopra finished training under Jaiveer for a year, he was enrolled at the Tau Devi Lal Sports Complex in Panchkula, where he began training under coach Naseem Ahmed.

Gothic dresses displayed in a store

The emergence of the Industrial Revolution in Victorian England brought with it many apprehensions and fears that translated into a new genre in literature: the gothic. Today, the idea of the gothic does not have to much with literature as much as it is associated with fashion.

The Victorians began to wear black more often during the Industrial Revolution to hide the stains of soot on their clothes. Many of the working class were employed in factories. They were newly introduced to technology, the idea of coal as fuel, and the working of machines to serve a certain purpose. This kind of work was hard and messy. Wearing light colours burdened the tired folk when the stubborn stains did not get washed away.