NEW YORK,11 March, 2017: A bronze of a little girl defiantly facing Wall Street’s Charging Bull didn’t appear suddenly or spontaneously in the middle of the night in Manhattan’s financial district.

It took months of intricate planning by two corporate giants to install “Fearless Girl” under the veil of darkness in time for Wednesday’s International Women’s Day. Within hours, she became the talk of the town and the world, a sculpted celebrity drawing crowds as a symbol of a woman’s right to move into power positions.

Behind the scenes, State Street Global Advisors, a $2.5 trillion asset managing firm, created the Fearless Girl project with McCann New York, one of the world’s top ad agencies whose client is State Street. The financial giant wanted to spread a serious message: that more women should be appointed to the boards of the Russell 3000, a broad index of U.S. companies. 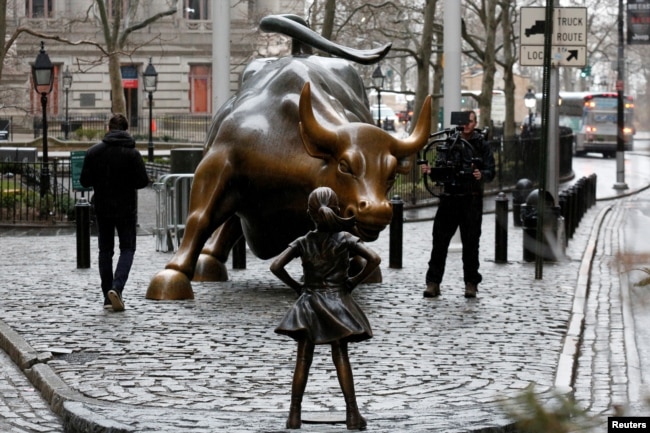 Only 16 percent of board seats in Russell 3000 companies are held by women, according to ISS Analytics, a business research firm. Also on State Street’s radar are about 500 other firms in Great Britain and Australia.

The aim of the Fearless Girl was to build what ad experts call a “brand experience” of a product or message, using some kind of creative, unique vehicle — in this case, a sculpture, created by artist Kristen Visbal.

“This thing went viral, and it spread globally, all over,” McCann spokesman Jeremy Miller said. “I’m watching my Twitter feed and it’s still a constant flow, filled with images of the Fearless Girl.”

“In my 20 years in advertising, I personally have not seen anything like this,” he added.

On Thursday, streams of gleeful fans posed for pictures with the 250-pound Fearless Girl statue as she stared down the 7,000-pound Charging Bull.

McCann obtained a one-week permit from the city before starting the installation in Bowling Green Park at 4 a.m. Tuesday, completing it as the sun rose on another New York business day.

The ad agency wasn’t trying to be secretive.

“We just didn’t want to disrupt business in the area,” Miller said.

And they wanted to mirror the 1989 arrival of the girl’s bronze counterpart.

The Charging Bull was dropped into place in the middle of a Manhattan night by artist Arturo Di Modica and his team, who had no permit. The powerful piece was a symbol of Americans’ can-do energy following the 1987 stock market crash, and it proved so popular that the city allowed the bull to stay.

At the end of International Women’s Day on Wednesday, New York Mayor Bill de Blasio tweeted that Fearless Girl could remain in Lower Manhattan through April 2. Popular support for the piece to be kept permanently is growing, with petitions being signed.

“Our future rests in the hands of fearless girls,” the Democratic mayor tweeted. (VOA)

After Customer Abuse, A US Restaurant Closes For A ‘Day Of Kindness’