Nigerians go to the polls Saturday to choose a president and legislature for Africa’s most populous country, returning two weeks later to pick state governors and local representatives.

Voters in the West African nation must decide whether to grant a second term to President Muhammadu Buhari.

Buhari’s main challenger — in a field of at least 60 contenders — is Atiku Abubakar, a 72-year-old businessman and former vice president campaigning on a similar platform.

But another issue looms over the vote: election-related violence. Last Sunday alone, five people were fatally shot near the southeastern city of Warri in what local police attributed to political divides, the AFP news agency reported. The shootings had followed clashes between young supporters of Buhari’s ruling All Progressives Congress (APC) and the main opposition People’s Democratic Party fronted by Abubakar.

“Violence is the major problem of every election,” said Patricia Onoja, a 60-year-old retired nurse in Abuja, the capital. She told VOA she counsels young people to resist any thuggery – a mission undertaken by other Nigerian parent groups, too.

Human Rights Watch says that more than 800 people died in 2011 election-related violence. But voting in 2015 brought the comparatively peaceful handover of power from Goodluck Jonathan to Buhari.

Now, the country will be tested on whether it “can successfully conduct two consecutive, credible elections,” says Oge Onubogu, a Nigerian-born Africa program officer with the United States Institute of Peace who closely follows the elections.

Nigeria’s Independent National Electoral Commission (INEC) says it’s prepared for Saturday’s vote, despite troubles such as a suspected arson fire at its annex in the Middle Belt city of Jos.

Clement Nwankwo, a lawyer and convener of the Nigeria Civil Society Situation Room, said that umbrella group has built “a good relationship” with the INEC. Nwankwo said the Situation Room has trained monitors and will relay any concerns – from missing elections materials to allegations of abuse – so INEC can address problems quickly. “We’re able to intervene,” he said.

Here’s a closer look at the campaign issues:

Buhari, in a late-December interview with VOA at the presidential villa in Abuja, said Nigerian security troops had reduced the amount of territory controlled by the Islamist extremist group Boko Haram in the country’s northeast.

“Now you can check in the northeast that Boko Haram is not holding any local government, per se,” he said.

Another threat comes from increased conflicts between herdsmen and farmers over land use in the so-called Middle Belt. The International Crisis Group reports more than 1,300 related deaths since January 2018.

Abubakar blames the Buhari administration for what he calls Nigeria’s “worst insecurity. … It was confined to the northeast” when Buhari took office but now has spread.

John Campbell, a former U.S. ambassador to Nigeria and a senior fellow with the Council on Foreign Relations, edits the CRF Nigeria Security Tracker. It maps reported violence around the country.

He said he sees “no new ideas from either candidate about how to deal with Boko Haram, no real discussion about the much more broad-based security issues which now cover the entire country.”

Though oil-rich Nigeria has one of Africa’s leading economies, it’s still recovering from the 2014 plunge in crude prices. Poverty is rife in the country of nearly 200 million, with an estimated 87 million (44 percent) who are desperately poor, according to the World Poverty Clock.

“In terms of having money for food and shelter, things are as bad as they’ve ever been for Nigerians,” said Jay Loschky, the poll’s regional director for English-speaking Africa.

Buhari has said that, if granted a second term, he would focus on boosting job creation and completing infrastructure projects.

Abubakar — who worked in customs and the oil sector,and founded the private American University of Nigeria — says he has the business acumen to help guide the economy and encourage job creation.

In an interview with VOA last month in Washington, Abubakar derided the Buhari administration for Nigeria’s jobless rate, which officially rose to 23 percent in 2018’s third quarter, up from 19 percent the previous year. That translates to more than 20 million unemployed. “Twenty million is no joke,” he said. “It is a time bomb.”

“The private sector is not expanding. … I think that’s the greatest problem we have in Nigeria,” Tohomdet told VOA. “And the youth, of course, are frustrated.” And vulnerable, he added. “They can be subject to manipulation and they could be used for antisocial activity. … It’s not that they are not ready to work. The atmosphere is very tough.”

Buhari’s supporters call him “the incorruptible man.” But critics accuse Nigerian military officials of corruption and say Buhari’s administration has looked the other way.

Last month, the president also drew condemnation — domestically and from abroad — when he suspended Nigeria’s chief justice from the position where he would have a key say in resolving any election disputes.

Abubakar has encountered clouds of suspicion over time. As the BBC pointed out in a candidate profile last week, he was accused in 2006 of diverting public money toward “his business interests” while serving as vice president. A 2010 report from the U.S. Senate Permanent Subcommittee on Investigations also alleged that Abubakar was involved in bringing “suspect funds into the United States” through the bank account of his American wife.

He was linked to another case: the bribery conviction of a U.S. congressman, William Jefferson, a Democrat from Louisiana. Identified by the U.S. government as a corrupt foreign official, Abubakar was barred entry to the country. 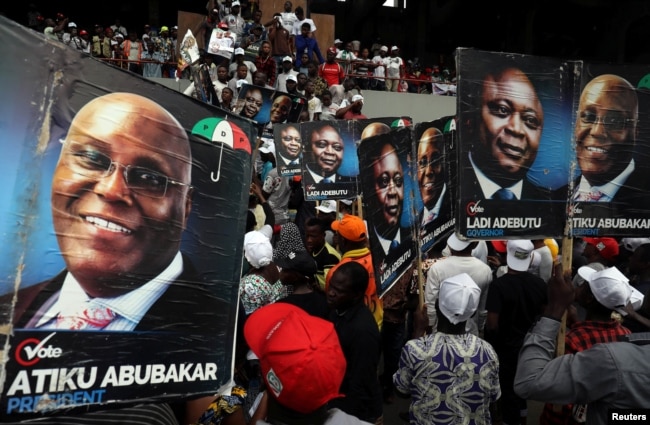 But he never faced any charges.

“Nobody has brought any evidence of corruption against me,” Abubakar said during his interview at VOA’s Washington headquarters.

His two-day January visit to the United States — his first in more than 12 years — dispelled the Nigerian rumor that he would be arrested upon arrival. Instead, the candidate met with some members of Congress, the State Department and the U.S. Chamber of Commerce.

Abubakar was able to obtain a U.S. visa through the intervention of American lobbyists, Bloomberg news reported last week.

He also has said he would consider an amnesty program to encourage looters of public funds to voluntarily return the money.

Nigerians view the approaching elections with modest but improved confidence in the process, according to a Gallup poll released Based on polling conducted in mid-2018, it found that roughly a third of respondents — 34 percent, up from 13 percent in 2014 — have faith in “the honesty of elections.”

Is There A Higher Level Of Violence In Muslim Countries?

“Save the Tiger” Campaign Must Inspire And Spread Awareness”

Know Why Being A Journalist In Myanmar Is Highly Risky