Is Qutub Minar Built Over Premises Of A Plundered Hindu Temple?

BANGALORE, March 17, 2017: Visitors to Bangalore, India, these days can see street art, have beer at local microbreweries or take an Uber ride to a distant neighborhood to meet with venture capitalists about a recent startup that grabbed their attention.

Gone are the days of a city dominated by call centers and American visa seekers.

“There’s an artisanal hot dog place there,” Sean Blagsvedt, founder of online job portal Babajob, said of a nearby neighborhood, speaking over his plate of salmon sashimi. “You have a bazillion 20-something tech people who don’t like to cook and suddenly have a [large amount] of money to start paying for interesting food. … You saw the same things in San Francisco.” 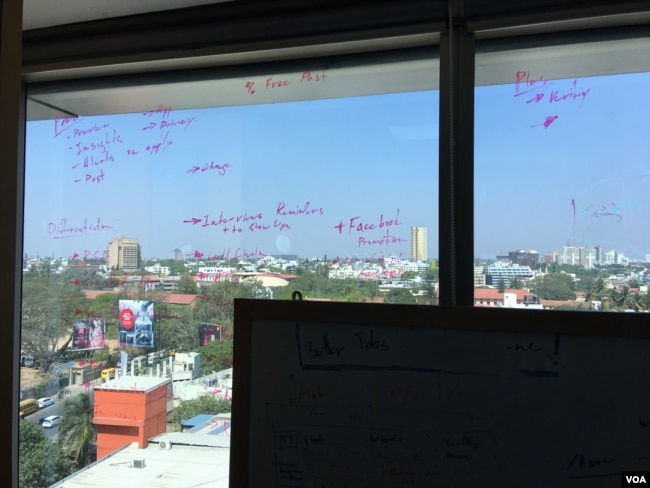 Babajob employees take notes on a window overlooking a neighborhood in downtown Bangalore.

A wide variety of dining options, nightlife and other activities has blossomed alongside the tech industry in “India’s Silicon Valley.”

Bangalore was rated the most dynamic city in the world, two spots ahead of California’s Silicon Valley — which isn’t a city but was ranked as one — by the JLL City Momentum Index this year. The index looks at more than 100 cities around the world, rated by their “ability to embrace technological change, absorb rapid population growth and strengthen global connectivity.”

Call centers and outsourced IT workers still make up a part of Bangalore, but a vibrant crowd of modern, enthusiastic, tech-minded people has grown to dominate the city — and for most of them, the promise of “a better life” abroad is not on their radar.

Bangalore, however, has been attracting Americans and Europeans to start companies in India for Indians. And this phenomenon is hardly new. 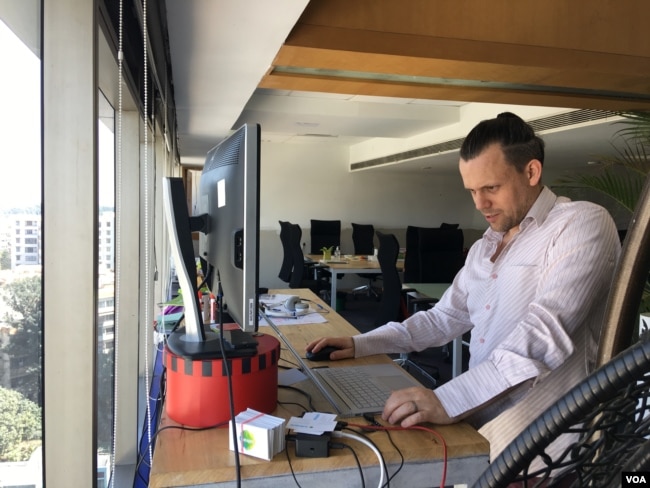 Sean Blagsvedt, an American, moved to Bangalore over 10 years ago and started his own company. (E. Sarai/VOA)

Blagsvedt, who is also Babajob’s CEO, moved to Bangalore from his hometown of Seattle, Washington, when he was 28 to work with Microsoft. Although Blagsvedt enjoyed his work, he felt compelled to work more directly with Indians, for Indians.

After reading a study that said to get out of poverty, one needed to either change jobs or start a successful business, Blagsvedt was inspired to change how people found those positions.

“If only we could find a way to digitize all the jobs, make it accessible to people who don’t use computers, and digitize the social network, then we might be able to catalyze the escape from poverty for a lot of people,” he said.

Twelve years, a successful company and a family later, Blagsvedt is “more Bangalorean than me!” according to an Indian on his team, Akshay Chaturvedi. 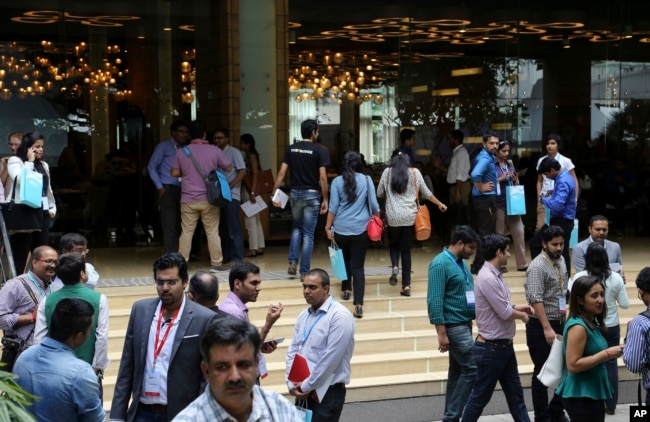 In the past 10 years, however, it’s not just Americans and Europeans with humanitarian motivations who are starting companies in Bangalore.

Indians, even those who paid for American educations and planned to pay off those debts with American jobs, have seen the increasing opportunity back home.

‘A lot of vibrancy’

“[There is] a lot of young talent trying to build solutions that are uniquely India on almost every sector, whether that’s health services, education, digital media, even financial inclusion,” said Vani Kola, a venture capitalist who has been in Bangalore for 10 years after working in Silicon Valley. “I see a lot of vibrancy with respect to opportunity for building unique companies with unique solutions for India.”

And Indians have taken advantage of that opportunity. The number of startups in Bangalore rivals those in the top tech cities around the world. In 2015, San Francisco research firm Compass rated Bangalore as the second fastest-growing startup ecosystem in the world, and it was the only Asian city besides Singapore to place in the top 20 startup ecosystems. 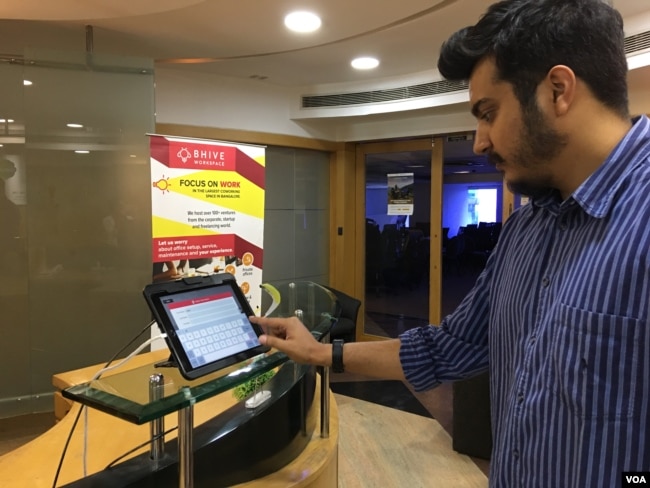 Akshay Chaturvedi, who recently began his own startup, checks in to a communal office space on an iPad. (E. Sarai/VOA)

Chaturvedi is one such person who, after completing a fellowship in the United States, returned to India, specifically Bangalore, to join the world of unique Indian startups.

“I can’t imagine my life without startups,” Chaturvedi told VOA. “Everything I do — I’m touched by a startup at least 20 times a day. Every single dinner I order by some food tech startup.”

In the days after we spoke with him at Babajob, Chaturvedi quit to work on his own startup — Leverage, an online platform for higher education services.

Although the question of the future of H1-B visas, a visa most often granted to IT workers from India, is on the minds of American companies that employ them, Bangalore seems less concerned.

“When students studied there, I said, ‘Look, there’s a lot of opportunity calling in India — can’t I do something here?’ That, I think, was a trend that was already there for the last few years,” Chaturvedi said. “And now [the] Indian economy seems to be strong and the opportunity from startups seems very viable in India.” Blagsvedt holds a stronger opinion, saying that H1-B visas are exploitative, and that the rise of opportunity in Bangalore has limited the number of people desperate for those options.

“They haven’t raised that minimum salary in 22 years,” Blagsvedt said. “Now you tell me where you can hire a five-year programmer in Silicon Valley for $65,000 [a year]. You just can’t. And what does that guy have as recourse? If he doesn’t like the job, his visa is sponsored fully … he can’t complain, he can’t even switch jobs!”

Blagsvedt and Chaturvedi both said that in the Bangalore startup ecosystem, they had heard no talk, or worry, about the proposed changes to the U.S. visa program.

Chaturvedi did admit, however, that any threats to the H1-B program “would have been far scarier 10 years back.”

Here's How This Haryana Village Managed To Stay Covid-Free

Know About The Most Powerful Weapons Used In The Mahabharata War

CAIT Has Alleged Foreign E-commerce Are Vreating A False Narrative

E-Payments For Charity Grew By 575% During Lockdown 2.0

What Was The Story Of Javed Sheikh & Daughters?

Know The History & Legends Behind The Indian States (Part- I)

14 Ways To Save Money In Your Divorce Process

Divorce is a hard fact in someone's life because it can affect all aspects of life like social, economic, and living status. Conditions become tougher if you have children. Recovering from divorce is also a painful process but good thing is that it is possible to get through it and place better in terms of both finances and emotions. The impact of divorce on finances can be life-lasting but taking precautions and thorough investigations of options can help a lot not only to save unnecessary costs but also some other hidden areas where you weren't aware. Following are some tips to save money during a divorce.

1.Avoid advice from everyone

Hosting the Olympics is an economic burden on host cities which mainly include construction delays, cost overruns, security issues, and environmental concerns.

Gone are those days when people, sports enthusiasts, and governments lined up to host the Olympics. Hosting the Olympics, once seemed to be an immensely prideful event, but it has now transformed into an economic burden. Host cities grapple with a plethora of problems which mainly include construction delays, cost overruns, security issues, and environmental concerns.

Indian wrestler Ravi Kumar (57kg) and Deepak Punia (86kg) enjoyed fruitful outings at the Tokyo Olympic Games as they secured semifinal berths in their respective weight categories at the Makuhari Messe on Wednesday.

On the opening day of the wrestling competition, Ravi Kumar defeated Bulgaria's Georgi Vangelov 14-4 on technical superiority to reach the last-four in the men's 57kg category, while compatriot Deepak Punia overcame China's Zushen Lin 6-3 on points to advance to the semifinals.

Ravi Kumar will take on Nurislam Sanayev of Kazakhstan in the last-four, while Punia will be up against David Morris Taylor of the USA.

Earlier, Ravi Kumar had won his opening-round bout by technical superiority against Colombia's Oscar Tigreros to secure a quarterfinal spot. Competing in the Round-of-16 bout against the Colombian wrestler, the 23-year-old Ravi Kumar, who is making his Olympic debut, showed no nerves as he dominated the bout to win by technical superiority (13-2).

India's 86kg freestyle wrestler Deepak Punia showed no signs of the niggle that had forced him to pull out of the Poland Open Ranking Series in Warsaw in June, as he defeated Nigeria's Ekerekeme Agiomor on technical superiority to secure a quarterfinal berth.

He got his Olympic campaign to a fine start as he was in control from the start of the bout and hardly ever allowed his Nigerian opponent any room to maneuver his moves, finally winning with a 12-1 on technical superiority.

Punia, who had also suffered an elbow injury just before the Games, was slow at the start but came into his own as the bout progressed, inflicting takedowns at regular intervals to earn points.

The Indian wrestler eased into a 4-1 lead at the break and extended his lead comfortably in the second period.

Punia, the silver medallist from the 2019 world wrestling championships, then set up a clash with China's Lin Zushen in the quarterfinals and defeated him 6-3.