Sudden Drops In Oxygen Levels: Threat To The Survival Of Coral Reefs

Sudden Drops In Oxygen Levels: Threat To The Survival Of Coral Reefs 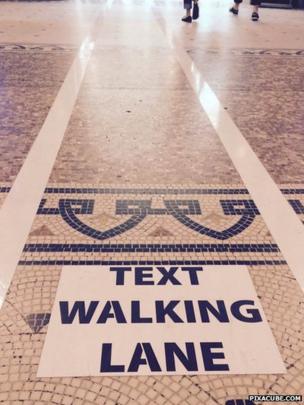 Temporary “text walking lanes” have been allotted to people using their phones in the center of the Belgian city of Antwerp, as a step to avoid accidents due to collision.

The initiative which is being looked upon as a publicity stunt is the brainchild of a smartphone store based in the city. It says that a significant number of mobile phone breakages happen because of “text walking” collisions.

“You probably walk through the streets while texting or sending WhatsApp messages to your friends and don’t really pay attention to your surroundings – only to whatever is happening on your screen,” a spokesman for Mlab, a smartphone laboratory based in Antwerp, was quoted by Yahoo News as saying.

“This causes collisions with poles or other pedestrians. You could, unknowingly, even be endangering your own life while you ‘textwalk’ when you cross the street without looking up.”

As of now, the concept of these lanes has been applied on a temporary basis. Officials, however, say that they’re most likely to be made permanent.

Belgium isn’t the first place to have adopted this idea. Before this, the city authorities of Chongqing, China, had designated a 30 meter (100 foot) “cellphone lane” in 2014 to tackle the problem of distracted walking.

What Was The Story Of Javed Sheikh & Daughters?

Yogi's Helpline Is A Lifesaver During Pandemic

Engineers Are Looking For Different Job During Pandemic

How Beneficial Will Be The New Co-operation Ministry?

The Indian ships will spend more than two months in the region, the navy said in a statement.

NEW DELHI - India Navy sending four ships for exercises and port visits with the Philippines, Vietnam, Singapore, Indonesia and Australia to strengthen cooperation in the Indo-Pacific region, its navy said Wednesday, as China's maritime power grows in the area.

The Indian ships will spend more than two months in the region, the navy said in a statement.

The UK government on Thursday announced that it will move India from the red to the amber list on Sunday, in the country's latest update to the 'Red-Amber-Green' traffic light ratings for arrivals into England amid the Covid-19 pandemic.

This means the visit visas for the UK from India are open, in addition to other long-term visas that have remained open. But travellers from India arriving in England can complete a 10-day quarantine at home or in the place they are staying (not mandatorily quarantine in a managed hotel).

Pakistan has failed miserably to protect Hindus, their interests.

A Hindu temple in Pakistan's Punjab province was reportedly vandalized by hundreds of people after a nine-year-old Hindu boy, who allegedly urinated at a local seminary, received bail, a media report said on Thursday.

According to the Dawn news report, the incident took place on Wednesday in Bhong town, about 60 km from Rahim Yar Khan city.

Besides the vandalization, the mob also blocked the Sukkur-Multan Motorway (M-5), the report added.

Citing sources, Dawn news said that a case was registered against the minor on July 24 based on a complaint filed by a cleric, Hafiz Muhammad Ibrahim, of the Darul Uloom Arabia Taleemul Quran.

The sources said that "some Hindu elders did tender an apology to the seminary administration saying the accused was a minor and mentally challenged".

But, when a lower court granted him bail a few days ago, some people incited the public in the town on Wednesday and got all shops there closed in protest, the report quoted the sources as further saying.