Washington DC, May 21, 2017: Heavy rain shaped the Martian landscape billions of years ago, according to a new study.

According to researchers at the Smithsonian Institution and the Johns Hopkins University Applied Physics Laboratory, rain on Mars once carved river beds and created valleys much like rain on Earth has, and does. It no longer rains on the Red Planet, and the water that remains is mostly in the form of ice.

The rain appears to have slowly changed over time, researchers said, noting that changes in the Martian atmosphere influenced how heavy the rain was, particularly the size of the raindrops.

When Mars formed 4.5 billion years ago, it had a much thicker atmosphere and higher atmospheric pressure. Pressure, researchers say, influences the size of raindrops. A view of the surface of Mars taken at the “Intrepid” crater by the Opportunity Mars Rover on November 11, 2010. (NASA/JPL-Caltech/Cornell University)

They say that early in the planet’s history, the rain would have actually been more like fog, so it would unlikely have made much of an impact on the terrain. But as the atmosphere thinned over time, larger raindrops could form and were heavy enough to “cut into the soil” changing the shape of craters and leading to running water that could have carved valleys.

Specifically, researcher say the atmospheric pressure on the Red Planet was about four bars, compared to one bar on Earth today. This means the raindrops could not have been bigger than three millimeters across. Over time the pressure dropped to 1.5 bars allowing for larger drops measuring about 7.3 millimeters across. 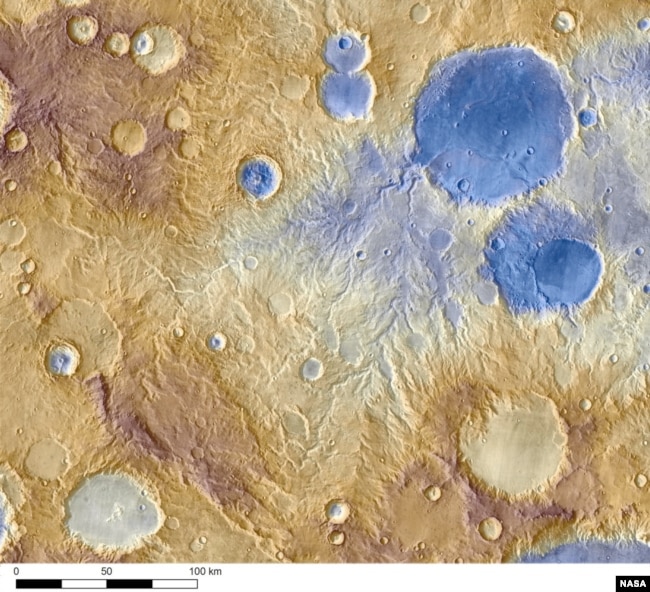 Water-carved valleys on Mars appear to have been caused by runoff from precipitation, likely meltwater from snow. Early Martian precipitation would have fallen on mountainsides and crater rims.

“By using basic physical principles to understand the relationship between the atmosphere, raindrop size and rainfall intensity, we have shown that Mars would have seen some pretty big raindrops that would have been able to make more drastic changes to the surface than the earlier fog-like droplets,” said Ralph Lorenz of John Hopkins APL.(VOA)