It was shut down after a catastrophic system failure sent one car crashing into the other in 2001, killing a passenger

The narrow-gauge railroad that for more than a century hauled people 298 feet up and down the city’s steep Bunker Hill was shut down in 2013 after a series of mishaps, including a crash that killed a rider.

At a news conference Wednesday, Mayor Eric Garcetti said those issues are being resolved and the railroad’s antique wooden cars, named Sinai and Olivet, should be back in service by Labor Day. They’ll be operated by a public-private partnership between the nonprofit Angels Flight Foundation and the private company ACS Infrastructure Development.

“As anyone who has seen ‘La La Land’ can tell you, dreams do still come true here in Los Angeles,” Garcetti said exuberantly as dozens of cheering Angels Flight fans crowded together with reporters to hear his announcement just outside the railway’s bottom-of-the-hill station.

The railroad’s resurrection has been planned for months, but it may have gotten an unexpected boost when moviegoers saw Emma Stone and Ryan Gosling riding happily in one of the cars in “La La Land.” Many took to social media to ask why they couldn’t ride too.

That scene was just one of several film shoots the funicular has appeared in, said John Wellborne, past chairman of the Angels Flight Railway Foundation. But, he added with a chuckle, “It got a lot more attention than we anticipated.”

Meanwhile, some work still needs to be done before the cars can move again under an agreement reached with the state Public Utilities Commission.

That includes upgrading its funicular system in which the two cars’ counterbalancing weights allow one to be pulled up safely while the other is lowered. An emergency ramp must also be installed next to the railroad tracks so that if the cars break down in mid-run, as they did in 2013, firefighters won’t have to rescue the passengers this time. 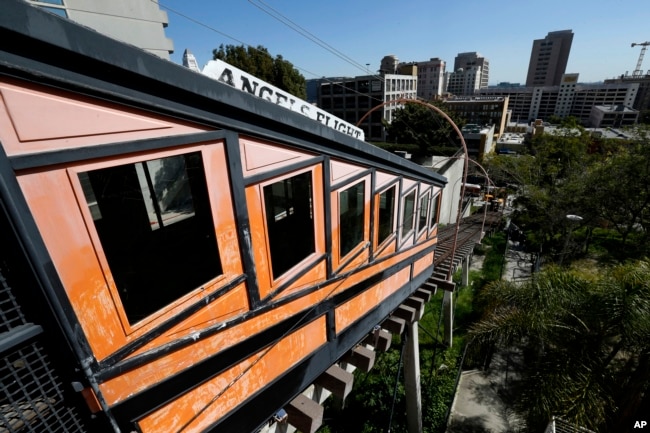 Despite its recent woes, Angels Flight, listed on the National Register of Historic Places, holds a special place in the hearts of LA residents of all ages who will tell you countless stories of coming downtown to ride it during their childhood.

“I was 5 years old,” said Ron Lozano, who still vividly recalls the short trip as being his first thrill ride. “I didn’t get to Disneyland until I was 17.”

“It was heartbreaking when it shut down,” said the engineer who for years worked in a downtown skyscraper overlooking the tracks.

It operated until 1969 when it was shut down as the neighborhood, having fallen on hard times, underwent redevelopment. 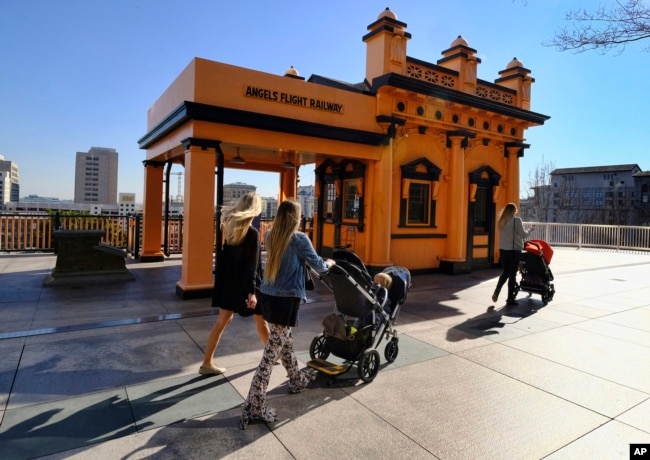 It reopened in 1996, just as the area was beginning to undergo a renaissance. For the next few years it carried thousands of tourists and office workers from the skyscrapers, museums and fashionable hotels that sprung up on Bunker Hill to the Grand Central Market below.

It was shut down after a catastrophic system failure sent one car crashing into the other in 2001, killing a passenger.

Reopened in 2010, it was closed three years later after a derailment stranded riders.(VOA)

Observations made by a small spacecraft called HaloSat have shown that the Milky Way galaxy is surrounded by a clumpy halo of hot gases...
Read more
India

By Maria Wirth “Í prefer Trump to Hillary”, I told a German friend in the run up to the US elections in 2016. There was...
Read more
Health & Fitness

U.S. regulators Wednesday approved the first drug for the treatment of Ebola. The Food and Drug Administration OK'd the drug developed by Regeneron Pharmaceuticals for...
Read more

Facebook and Instagram on Tuesday launched several features and content programming to help make virtual Durga Puja celebrations as entertaining as possible in the...
Read more

As the country marks the auspicious 'Navratri' festival, an online exhibition of artworks featuring the nine forms or 'avatars' of divinity is currently live...
Read more

This Festive Season Tantalize Your Taste Buds With ‘Navratri Thali’

As one is ready to welcome Goddess Durga with immense joy and celebration, the auspicious and divine days of Navratris are here. If you're in...
Read more

6 Books To Add In Your Bookshelf This October

If you are looking to welcome the festive season with a dash of reading, six upcoming Indian authors could be interesting additions to your...
Read more

Divorce And Separation: Realize That You Are No Longer A Married Couple

By Greg Summit It would seem obvious that divorce means that you are no longer a couple. But in practice, many are faced with the...
Read more

By Salil Gewali October is here, and we, with the feeling of enthusiasm, are set to celebrate Durga Puja. For many of us, Durga Puja...
Read more

When the air quality outside is bad, office workers are more likely to order food than go out for lunch, which in turn increases...
Read more

Patients who have recovered from COVID-19 can again get infected by the virus once the antibodies of the viral disease start depleting, the Indian...
Read more
Load more