Manchester, May 24, 2017: Libyan security forces said Wednesday that they had arrested a brother and the father of Manchester suicide bomber Salman Abedi.

A spokesman for the Libyan anti-terrorism force said Hashim Abedi had recently been in contact with his brother and knew of his plans for the attack.

“We have evidence that he is involved in Daesh [an Arabic name for the Islamic State group] with his brother. We have been following him for more than one month and a half,” the spokesman said.

Salman Abedi blew himself up in the Manchester Arena, killing 22 people and wounding scores of others, just moments after the ending of a pop music show featuring American singer Ariana Grande.

Abedi’s father told Reuters he spoke to his son five days ago, and “everything was normal.”

His son did not have extremist beliefs, the father said in Tripoli, where he lives. However, he added that Abedi did not disclose he was heading for Manchester when he left Libya last week.

The top police official in Manchester, Chief Constable Ian Hopkins, told reporters Wednesday, “It’s very clear that this is a network that we are investigating,” and that Abedi did not act alone.

Police made a sixth arrest late Wednesday, a woman who was taken into custody during a raid on an apartment north of Manchester.

Five men are also in custody. Police have given no information about how they may be connected to the bombing. 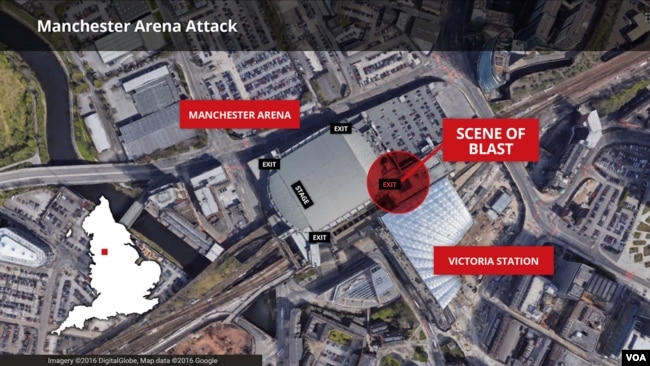 In France, Interior Minister Gerard Collomb said Wednesday that British and French intelligence had information that Abedi most likely traveled to Syria.

Collomb told France’s BFM television that Abedi “grew up in Britain and then suddenly, after a trip to Libya and then likely to Syria, became radicalized and decided to carry out this attack. In any case, the links with Daesh are proven.”

Islamic State has claimed responsibility for the attack, but British and U.S. intelligence have not confirmed that the extremist group was involved.

British and American newspapers have printed police images of some evidence left on the floor of the arena where Abedi blew himself up, including shreds of a backpack or vest that apparently held the bomb and a piece of bloodstained metal that may have been the detonator.

Britain raised its terrorism alert level to “critical” — the highest step — after the blast, signaling that another attack could be imminent, and Prime MinisterTheresa May cut short her trip to the Group of Seven meeting in Sicily later this week.

Soldiers are being deployed to such major events as soccer matches and concerts. The prime minister said authorities would do everything possible to protect the public, and she asked people to remain vigilant.

Video from the arena showed the joy in the audience at the end of the concert turning to confusion and then to panic and a scramble to get out of the building as the realization of what had happened spread. Many of the victims of the blast were young girls, including an 8-year-old child.

Witnesses saw blood-covered bodies on the floor as wounded concertgoers who were still able to move staggered toward the exits.

Grande canceled her tour schedule in Europe until June 7, when she is due to appear in Paris. (VOA)