New York,28Feb, 2017: The New York Times will air its first TV ad in seven years on Sunday’s broadcast of the Academy Awards on ABC, as the 166-year old newspaper looks to highlight independent journalism amid U.S. President Donald Trump’s attacks on the media as “fake news.”

The Oscars are among the pricier ad buys on television, with 30-second commercials going for between $1.9 and $2 million, according to ad-tracking firm Kantar Media. While ABC, owned by Walt Disney, does not comment on how much it receives from advertisers, a source with knowledge of negotiations said the Times’ ad buy was in that range.

The Oscars is traditionally the most-watched non-sports event broadcast in the United States.

Since Trump’s November 8 election victory, the Times has seen an uptick in digital subscribers and revenue even as its business on the print side declines. During the Times’ most recent quarter, the paper added 276,000 digital subscribers and grew digital ad revenue by nearly 11 percent, accounting for more than 40 percent of its overall ad revenues. 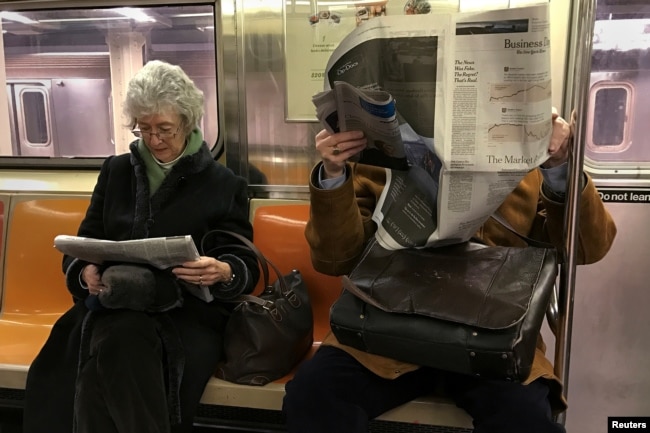 People ride the subway as they read newspapers as the train pulls into the Times Square in Manhattan, New York, Feb. 17, 2017.

The New York Times, the Financial Times, The Wall Street Journal and Gannett are building on the online readership they gained during the 2016 presidential election by marketing unbiased reporting as a sales strategy.

Trump has repeatedly bashed the press. In a tweet last week citing The New York Times, NBC, ABC, CBS and CNN, he said the media was “the enemy of the American People!”

Ad a response to ‘fake news’

The New York Times commercial is part of a broader brand campaign, the paper’s first in a decade, that aims to position the newspaper as a reliable outlet in the face of the rise of the “fake news” epidemic.

The company’s 30-second commercial repeats the words “The Truth Is” on screen, with voices in background getting increasingly louder, with different endings including “our nation is more divided than ever” and “alternative facts are lies.”

The ad ends with: “The Truth is more important now than ever.”(VOA)

Hybrid Work Is The Next Big Disruption In US Society

By Dora Mekouar Hybrid schedules could be the next monumental shift in the American workplace after last year's sudden move to remote work. More than 70%...
Read more
Lead Story

Racism In The United States Has a Long History

By- Khushi Bisht It was 1915, and India was still fighting for freedom when a man with his wife and three children chose to flee...
Read more
Lead Story

Tourists Queue Up 60 Years After The First American In Space

Sixty years after Alan Shepard became the first American in space, everyday people are on the verge of following in his cosmic footsteps. Jeff Bezos'...
Read more

Covid19 In India Brought Automation Technologies And IA To The Forefront

The Covid-19 pandemic has brought automation technologies to the forefront and the Intelligent Automation (IA) market in India is estimated to grow at a...
Read more

By- Khushi Bisht Corsets have existed for a very long time. It first originated in Italy and was brought to France in the 16th century...
Read more

Hybrid Work Is The Next Big Disruption In US Society

By Dora Mekouar Hybrid schedules could be the next monumental shift in the American workplace after last year's sudden move to remote work. More than 70%...
Read more

An Overview Of Bipolar Disorder

By Blake Jones Researchers have found a prototype for a new kind of immunotherapy for cancer. This therapy uses modified T-cells to target and attack...
Read more

The roller coaster ride that was 2020 brought the biggest dip in modern history, forcing individuals to adapt to major lifestyle changes while the...
Read more

At the personal level, the fight against the Covid-19 virus begins with strong immunity. As the second wave turns out to be more alarming...
Read more
Load more