ISLAMABAD, July 9, 2017: A senior Facebook official met with Pakistan’s interior minister on Friday to discuss a demand the company prevent blasphemous content or be blocked.

The meeting comes after a Pakistani counter-terrorism court sentenced a 30-year-old man to death for making blasphemous comments on Facebook, part of a wider crackdown.

Joel Kaplan, Facebook’s vice president of public policy, met Interior Minister Nisar Ali Khan, who offered to approve a Facebook office in Pakistan, which has 33 million users of the network.

Khan said Pakistan believes in freedom of expression, but that does not include insulting Islam or stoking religious tensions. 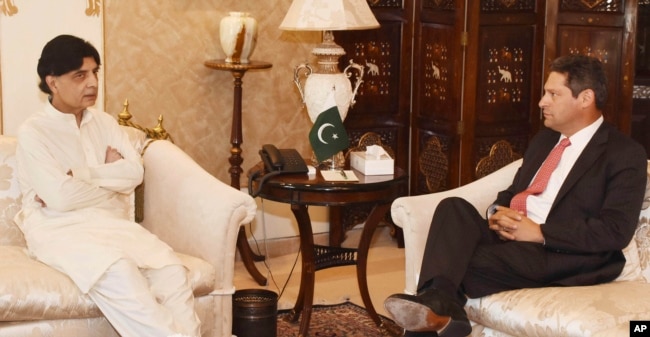 “Facebook met with Pakistan officials to express the company’s deep commitment to protecting the rights of the people who use its service, and to enabling people to express themselves freely and safely,” the company said in an email.

“It was an important and constructive meeting in which we raised our concerns over the recent court cases and made it clear we apply a strict legal process to any government request for data or content restrictions.”

Pakistan’s social media crack-down is officially aimed at weeding out blasphemy and shutting down accounts promoting terrorism, but civil rights activists say it has also swept up writers and bloggers who criticize the government or military.

One of five prominent writers and activists who disappeared for nearly three weeks this year later told a U.N. human rights event in March that Pakistan’s intelligence agencies had kidnapped him and tortured him in custody.

Others’ families said right-wing and Islamist parties had filed blasphemy accusations against them to punish them for critical writings.

Anything deemed insulting to Islam or the Prophet Muhammad carries a death penalty in Pakistan, and sometimes a mere allegation can lead to mob violence and lynchings. Right groups say the law is frequently abused to settle personal scores.

In April, a Pakistani university student, Mashal Khan, was beaten to death by a mob after being accused of blasphemous content on Facebook. Police arrested 57 people accused in the attack and said they had found no evidence Khan committed blasphemy. (VOA)

NewsGram is a Chicago-based non-profit media organization. We depend upon support from our readers to maintain our objective reporting. Show your support by Donating to NewsGram. Donations to NewsGram are tax-exempt.
Click here- www.newsgram.com/donate