Washington, May 21, 2017: The world’s No. 1 opium-producing country, Afghanistan, is braced for an exploding poppy harvest this year, as farmers are cultivating the illicit crop in areas where it has never grown before.

“Unfortunately, the narcotics production is on the rise this year,” Javed Qaem, Afghan deputy counternarcotics minister, told international donors in Kabul Tuesday. “We are concerned that narcotics would increase this year, including in areas and provinces where previously we had zero opium production.”

A new United Nations survey said Friday the total area under opium poppy cultivation in Afghanistan has increased by 10 percent, from 183,000 to 201,000 hectares, compared to the previous year, leading to a significant rise in the production of illicit opium. The illicit drug is fueling insecurity, violence and insurgency among other problems to discourage private and public investment in Afghanistan, the U.N. Office on Drugs and Crime said in its survey report.

Qaem’s comments come amid growing international concern that the Taliban, who are fighting Afghan government troops in rural areas of the country, are fueling the poppy trade by engaging in trafficking and skimming hundreds of millions dollars in profit to fuel their militancy.

Taliban insurgents, according to U.S. officials, net 60 percent of their war chest from narcotics. 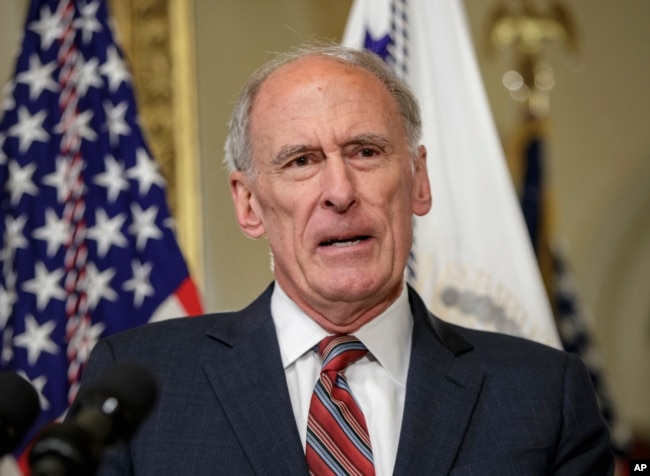 Director of National Intelligence Dan Coats speaks on Capitol Hill in Washington, March, 16, 2017, after being sworn in by Vice President Mike Pence.

Afghanistan is thought to produce an estimated 90 percent of the world’s heroin. As poppy cultivation spikes, U.S. intelligence officials warn that the war-torn country is likely to see more armed violence this year.

“The intelligence community assesses that the political and security situation in Afghanistan will almost certainly deteriorate through 2018, even with a modest increase in [the] military assistance by the United States and its partners,” U.S. Director of National Intelligence Dan Coats said in a Senate hearing last week.

Since 2002, the U.S. has spent more than $8.5 billion on counternarcotics in Afghanistan — about $1.5 million a day, according to the Special Investigator General for Afghanistan Reconstruction (SIGAR).

In addition to war, opium fuels corruption and organized crime in Afghanistan, a country already ranked among the five most corrupt states in the world by Transparency International.

Only 13 of the country’s 34 provinces were reported poppy-free in 2016, and this number has dropped into single digits this year, Afghan officials say.

Afghan authorities said poppies, which traditionally have been grown in southern provinces, have found fertile lands in several northern and northeastern provinces, including Balkh and Jawzjan.

A large-scale increase also is expected in provinces with previously little opium crops, such as northwestern Badghis and Ghor.

“Opium is cultivated in almost half of the province, including areas under the government influence,” a resident in northeastern Baghlan province told VOA on condition of anonymity for safety concerns. “Poppy crops are seen everywhere in the northeastern region. Badakhshan — which borders Tajikistan and China — is the epicenter of narcotics in the north.”

Afghan farmers work on a poppy field in the Gereshk district of Helmand province, Afghanistan, April 8, 2016.

Around 50 percent of the poppy crop in Afghanistan is produced in southern Helmand province, which borders Pakistan.

The Afghan government says the increase in drug production and trafficking is taking place mostly in conflict-hit areas.

“Opium cultivation, production and trafficking take place in remote areas that are under the control of militants, terrorists and the Taliban,” said Afghan General Baz Mohammad Ahmadi, the deputy interior minister for counternarcotics.

The Afghan government says it, along with aid agencies, has been trying to help Afghans find a sustainable alternative crop source. But those efforts appear to be failing.

Experts say worsening security and immediate economic benefits for farmers are major reasons for the rise in poppy cultivation.

Experts also believe that the increase is partly due to weak counternarcotics efforts by the government.

“The government lacks political will to fight opium production,” Abdul Aziz, a Kabul-based counternarcotics expert, told VOA. “For the last 16 years, the government has done little to rid the country of narcotics and provide alternatives to farmers.”

According to Sherzad, counternarcotics efforts require a comprehensive approach and coordination among government departments, which, he said, is lacking. He added that “narco-entrepreneurs” control large portions of government lands in several provinces where they cultivate poppies. (VOA)

What 2020 Taught Us About Finances